Despite having been investing in property for close to a decade, I just discovered a small rare class of properties in Singapore which where leasehold for 9999 years! You heard that right, not 999 but nearly ten thousand years! Examples of these properties are Opera Estate along Figaro Street and Perpetual Apartments around the Geylang vicinity in Singapore.
There are a few forms of land tenure practiced in Common Law today:
The freehold vs leasehold question has been an age-old debate. I was raised in a family who firmly value property ownership. My parents believed that properties where meant to be acquired, maintained and passed on to the next generation. Therefore, buying a leasehold property was never an option.
When making an investment decision, we should always consider our entry point, exit point, risk and investment horizon. The decision to purchase a freehold or leasehold very much depends upon our investment strategy.

If we view our property investments to transcend generations, a freehold property would definitely make sense.

Under some special circumstances, the government may also approve the top-up of leases. Some examples in Singapore include are Eng Cheong Tower, 1 Shenton Way (One Shenton), NatWest Centre (The Clift), Grangeford (Twin Peaks), Ong Building (76 Shenton) and HMC building (Lumiere).

In conclusion, while in it may seem common knowledge that freehold properties are superior, don’t underestimate the investment potential of leasehold properties as well.
Posted by Property Connection Asia at 07:22 No comments:

To buy or rent? This has been a discussion point that has surfaced many times during my interaction with friends, colleagues and relative. There seems to be a clear divide between these two seemingly opposing views of property ownership.
The renting camp will tell me that the property cycle is at a high now. It would be better to sell their current property, rent a place and wait to buy after a correction.
The buying camp tells me that they rather spend the money paying to own their own home rather help the landlord pay for theirs!
Depending on which region of the world you come from, the culture, government policy and influence of your upbringing will affective how you think about buying vs renting. According to Eurostats, 2012 home ownership rates in developed nations of France, Austria, Germany and Switzerland stand at 63.1%, 57.5%, 53.3% and 43.8% respectively. In contrast, according to various other sources, home ownership rates in Singapore, China and India are 90.5%, 90.0% and 86.6%.
Asian nations clearly show a stronger emphasis on home ownerships.
So, what factors would influence a person’s decision to buy or rent? Here are some consideration factors based on my discussions with different groups of people:
Renting
Buying


However, my advice is that one should not look at buying or renting as a mutually exclusive decision. You can buy and rent at the same time!
When I acquired my first property in 2005 far away from the city area, I was still single and living alone. I did not require such a large space and maintaining the unit would require more effort. I instead chose to rent it out for $1500 a month and then rented a small old room for $400 near the city fringe. The monthly mortgage to the bank then was about $1200.
Therefore the addition stream of income from my property helped to offset my rental. Had I stayed in my own place, I would have had to fork out $1200 every month affecting my cash flow; instead I now had only to pay $100 a month, ride the capital appreciation for the next 9 years and still enjoyed the location convenience!

Posted by Property Connection Asia at 08:35 No comments:

Sometime ago, a friend of mine visited a number of new property launches around Singapore and was amazed at the effort put into the showrooms. It looks almost like a dream home and she was almost prepared to pickup a unit!

But comparing the floor plans to the showroom revealed a very different story. What you see is not what you get!

Glass panels instead of walls
This trick is rather common and I have seen them in various showrooms around South East Asia. By making the walls transparent, small units appear spacious.

High showroom ceiling
This is an optical illusion to give grandeur first impressions. Looking on the bright side, your low ceiling unit does save you some money on the air-conditioning.

Balcony area enclosed
This trick was rather cleaver. I almost fell for this one before I noticed that the designer placed the sofa across into the balcony. The whole balcony area was enclosed in a larger glass panel and air-conditioned. This created the illusion that the balcony was part of the living room!

Fortunately in Singapore, the government has taken note of various showroom tricks. Since 2013, developers are required to follow the exact structural dimensions approved in the building plan. For other countries like Malaysia, Thailand and Philippines, there are no such regulations.

Showroom magicians are experts in recreating showrooms to look warm and inviting. However, observing how they create showroom magic allows us to spruce up our own homes! Here are some tips:


So the next time you visit a showroom, be sure to watch for the showroom magician’s slight of hand!
Posted by Property Connection Asia at 07:02 No comments:

Benefits and Risk of Investing in REITs

Today, I decided to compile a simple table to illustrate the benefits and risk of investing in REITs compared to direct property investment.

Direct property investment is capital intensive. Large amount of cash is required for the down payment and transaction cost (eg stamp duties, legal fees, property tax…etc). Purchasing of property for most would also require a bank loan of easily 70% to 90% of the property prices.

On the other hand, investing in the right REITs can be quite affordable. Yields are also much higher yield, enabling investors to grow their capital in a shorter period of time.

On my journey towards financial freedom, I will need to invest in both! REITs will help me grow my savings sufficiently to afford the down payment of a new property!
Posted by Property Connection Asia at 07:58 No comments: 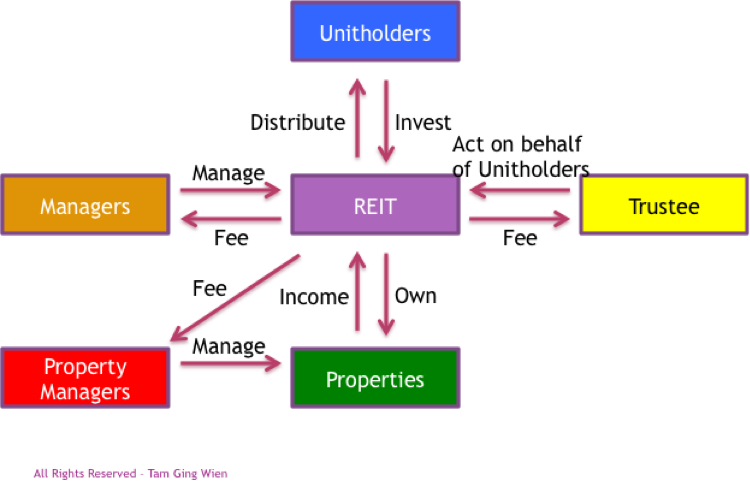 A typical REIT would have a structure similar to the diagram above.

A REIT Manager is appointed to manage the REIT. Performance of the manager could be measured in different ways, for example by the total assets size under management or the growth in the annual dividend payout to shareholders. Managers would therefore seek out asset acquisition opportunities or try to increase yield of the current properties. The REIT manager is usually paid a base fee for their service and bonus fees should their performance exceed expectations.

The Trustee typically holds properties owned by the REIT in trust on behalf of the shareholders. An appointed Property Manager will ensure that the premises are well maintained, kept clean and infrastructures are good working condition. The property manager will be paid a fee for their services.

Properties that are tenanted out will provide a steady stream of income to the REIT. Income from the properties are first used to pay the expenses of operating the REIT including the fees to the managers and trustees. The remaining amount could either be kept in reserve in the REIT and the rest distributed to shareholders. REIT listing regulations in Asia requires REITs to distribute at least 90% of their taxable income to shareholders.

Finally, shareholders purchase units in the REIT as an indirect method of investing in the underlying properties. In return, shareholders receive a periodic distribution of dividends.
Posted by Property Connection Asia at 06:50 No comments:

Want to receive more tips on property investment? Sign up for our FREE newsletter now! 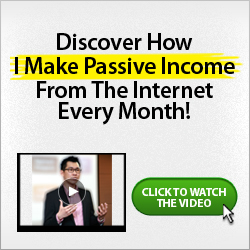